This article pulls together all a number of Facebook threads regarding a "possible" tunnel between the Lancaster Canal and the River Ribble in the early 1800's.  The original post contains the comment/query

Can anybody give me information about a pumping house, steam engine and tunnel running from the Ribble to the canal in Preston, opened in 1806 to supply water to the canal. This is all the information I have but would like to know where the engine house was. Any other information would be interesting.

Various correspondents replied with suggestions that William Millar, the canal engineer who took over when William Cartwright died in 1804, was responsible for this particular tunnel but without giving any idea of its position or reason for it.

The need for any extra water supply was queried.  It was pointed out that the levels were normally maintained by rainwater draining the fields.  Also that barges travelled between Preston and Lancaster even before the canal system had even been completed into the centre of Preston.

The word "tunnel" also promoted discussion.  The distance from the canal to the river was also queried as far as a tunnel was concerned. "Pipes" would also have been a more suitable way of holding the pressure.

The originator of the thread, Mike Allen, then provided more background:-

The information about the pumping engine that I started with came from 'The canals of North West England' by Charles Hadfield and Gordon Biddle 1970. In this book they say that '[the canal engineer] Cartwright also designed and supervised the cutting of a tunnel from the canal at Preston down through the rock into the Ribble, through which water was pumped by a Boulton and Watt steam engine. Pumping commenced in July 1806.  Later they state that the engine and land were sold in 1836 as the water from the Killington reservoir was found to be adequate to supply the canal.

The book also says that the work was completed by Cartwright's assistant James Miller. Perhaps the canal was leaking.

The position of the pumping engine was discussed with the most likely place being under the present University buildings, adjacent to Leighton street.  This being the shortest distance to the River Ribble.

The difference in shaft/tunnel reared its head again which led onto the possibility of taking water from boreholes.  Where they taking water from water table and thinking that this was the River Ribble?  Unfortunately, the only boreholes shown on the BGS viewer are located on the far side of Leighton street, away from the canal.

Various maps were analysed and on the 1840 O.S map a " pump" is shown close to Victoria mill at the river end of Marsh lane. There is also an enclosure next to the mill marked with what looks like "well". If the engine and land were sold off in 1836 presumably the engine was either dismantled and used elsewhere or put to use to supply a new venture, perhaps Victoria mill?

A reference, almost contempory with the construction of the tunnel/pipe was re-discovered.   Marmaduke Tulket wrote a book in 1821 called 'A topographical, statistical and historical account of the borough of Preston' in which he says [when describing the Horrock's canal street cotton mill]

''Opposite to this cotton mill, upon the north-west bank of the canal, stands the large steam-engine house, built of stone, and erected at the sole expence [expense?] of the canal company, in 1805,for the express purpose of conveying water into the canal, when deficient. The water is pumped by means of this powerful engine, out of deep subterraneous tunnels, forming a communication with the river Ribble. The engine enveloped within the walls of this massive building is rated at fifty boraes horses power; but at present la very seldom used."

Barney Smith, of Preston Digital Archive fame, suggested that the pumping house - or what remained of it (with adjacent well) was opposite Canal Street Mill. Still extant in 1862 when the following map was produced. 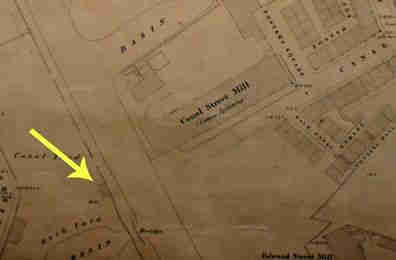 The working map for the canal company also shows the same position. 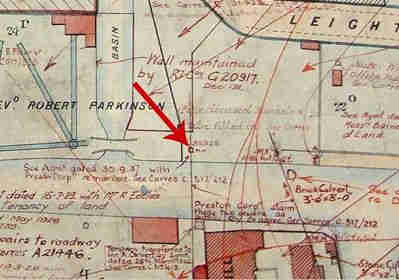 Since all of this area is now covered by University buildings all the building records available at Lancashire Archives looking for any sign of a cover for the tunnel.  Nothing was found.

More information appears in a document dated 20th November, 1809, in which the Lancaster Canal Company and Messrs Horrocks & Co agreed over various land disputes. The important portions, as far as this old discussion is concerned, is that Horrocks & Co “relinquish all claims…..in respect to use of their steam engine at the Canal Street Factory, during the time the Tunnel from the River Ribble was in execution”. Prior to the canal being built, the factory used “springs which drained Spittle Moss” for supplying water to their steam engines - now, it seems, they used canal water. Another important line in the document reads "during the time the Tunnel from the River Ribble was in execution" so the tunnel was only in operation for a very limited time.  Presumably the "leaks" on the canal had been reduced.  Canal street ran from the Lamb & Packet to the canal. It doesn’t explain what the word “tunnel” means but it does fix it into this area - as identified by Barney Smith.

The last document, for the moment, concerns an agreement (30th December, 1806) between the Proprietors of the Lancaster Canal Company, the Mayor, Bailiffs and Burgesses of Preston and John Grimshaw*.  In it there is a description of the Proprietors erecting a steam engine for the purpose "of drawing and raising water from the River Ribble into the said canal."  This should be achieved by "a tunnel or watercourse" which went through or underground land owned by Mayor, Bailiffs and Burgesses and known as Spittle Moss.  After a payment of £63 and a yearly rent of two shillings and sixpence the proprietors should "at all times hereafter leave and keep open one Eye Pitt or Hole" and that " the said pit eye or hole will and sufficiently covered or fenced off to prevent passengers and cattle from getting or falling into the same."  Also part of the agreement was "to remove spoil banks from Spittles Moss thrown up by the digging or to pay for damage occasioned by the spoil banks".  Does this imply that the tunnel was at a low level, perhaps a few feet below ground level?  Also, did the tunnel go futher to the north, over Spittle Moss before going down to the Ribble?  If so, why?

*Probably John Grimshaw who was an attorney in 1768 and owned land near to Davil Meadows, adjoining Marsh lane.  Was Mayor in 1782.

I did wonder if the marsh/Ribble end of the pipe might have something to do with the outlet which, it has always been supposed, was associated with Spa baths just above Watery lane.

The Corporation records for 1836  (CBP 1/1) show that the Lancaster Canal Co had to pay a rent of 2s 6d for the Tunnel under a part of the Marsh to their steam engine near the canal in Marsh Lane.  This must be related.

Other "probably" useful documents can be accessed at the PRO.

More information has come to light after a personal communication from Peter Bolton. He possesses the original agreement between John Grimshaw and the Lancaster Canal Company dated 1st January 1805.  This document contains much of the 30th December, 1806 mentioned above with the addition of the phrase "make a tunnel or water course (underground)".  It also mentions various distances - "three roods and twenty eight perches customary measure of seven yards to the rod or thereabouts" - which, given the lack of standardization at the time makes it difficult to work out exact distances.

Another document has recently come to light which further confuses the situation.  A note, written in 1801 by William Cartwright, describes the "Specification for driving the tunnel from the River Ribble to the Intended engine Pit" close to Mr Horrock's mill (RAIL 844/248).  Since the plans for the engine house were only drawn up in 1805 (see above) presumably this version of the tunnel was abandoned.