David Ratledge’s long research into Lancashire’s Roman Roads has benefitted much from the increased accessibility of LiDAR (Light Detection and Ranging) a process that uses laser beams projected from from equipment on an aircraft which then receives the returned ‘echo’ from the surface below. This can reveal features not visible to an observer on the ground and even surfaces hidden under foliage and grass. The application to the search for Roman roads, characterised by a raised agger and side ditches has brought brilliant results. One discovery has been confirmation of the line of the road linking the Roman depot at Walton le Dale to the fort at Lancaster. 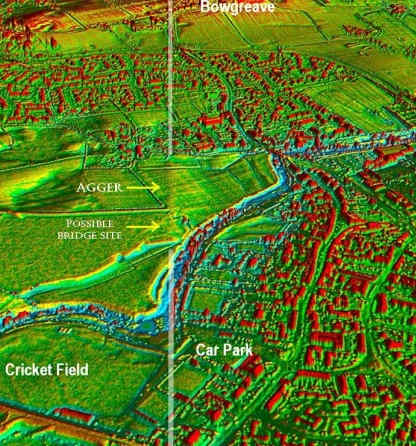 This picture looking south from Garstang shows how the line of the road approaches Garstang where it crosses the River Wyre close to the Council car park.  The LiDAR trace of the agger is in the centre of the picture

Our Garstang Big Dig was scheduled for the 4 days 23rd to 26th September and began with fine weather. As planned we opened 2 4m x 3m trenches, each divided lengthwise by a narrow baulk, over the middle and eastern anomalies identified by the Wigan AS GPR.

In both trenches, at around 37cms, we found a layer of cobbles of an average diameter of 15-20mm. These were laid on a bed of sandy clay of a red/orange colour. 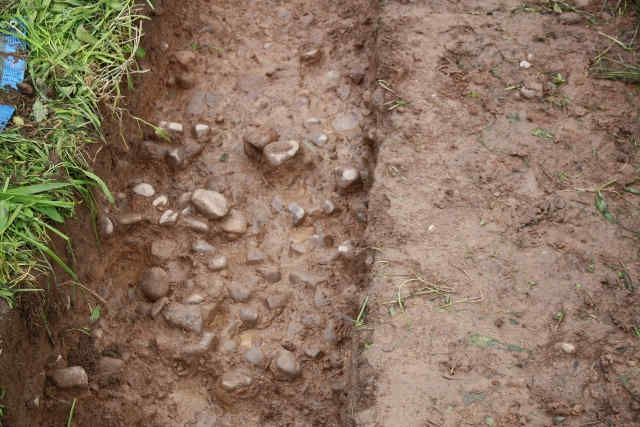 The concern was that rather than being parallel, the outer edges of the features in the respective trenches appeared to be converging to the NNW and, more puzzling, when we opened the 3rd planned trench between these first two, there was no evidence of any surface at that depth. Nor was there evidence of ditches bordering the supposed road.

Intermittent showers had proved a handicap, despite having our heavy duty shelter, and it became apparent that the dig would have to be suspended for Monday when heavy rain was forecast. The landowner did allow us to return on Tuesday 27th, albeit with a very depleted but hardy team to backfill part of the trenches and replace turves. She also kindly agreed to our returning the following weekend with a proviso that the field would be returned to its original state by the afternoon of Sunday 2nd October. 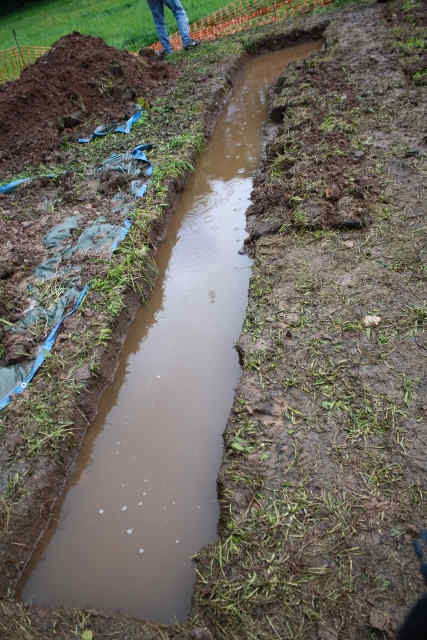 Over the week, heavy rain proved a real problem as the trenches, despite being covered, acted as sumps into which water drained resulting in the need to bail out before further investigation (above).

VWith the landowner’s permission we opened a 4th trench over the anomaly located closer to the gate in which the only feature was a scatter of larger cobbles at a depth of about 1m that were interpreted as natural, possibly glacial in origin. It must be said, however, that this trench was excavated during a period of very heavy rain and that the only way to counter that was to dig out part of the trench to act as a sump. Consequently, the area exposed was limited to about 0.5m square and offered no additional information.

After bailing out the main trenches and part backfilling to reduce water influx, it was possible to excavate the eastern extremity of Trench2 and the western end of Trench 1.  In the further excavation of Trench 2 we were able to expose more of the cobbled surface described above. Here, it became apparent that the surface had been subject to damage that had removed part of the edge resulting in an almost 90 degree ‘bite’ out of the surface (above left). On further excavation it was observed that the actual original edge was in fact orientated almost exactly N-S and parallel to the feature in Trench 1(above right). 2m scale laid N-S North at top.

In the western extremity of Trench 1 was revealed at a depth of around 0.8m a layer of larger cobbles of average diameter 30-40mm. Their arrangement was evidently not random and we concluded that this might represent part of the foundation layer for the road structure (below). The depth at which these were found suggests that, when attempting to find the ditches, our excavations have not been sufficiently deep. 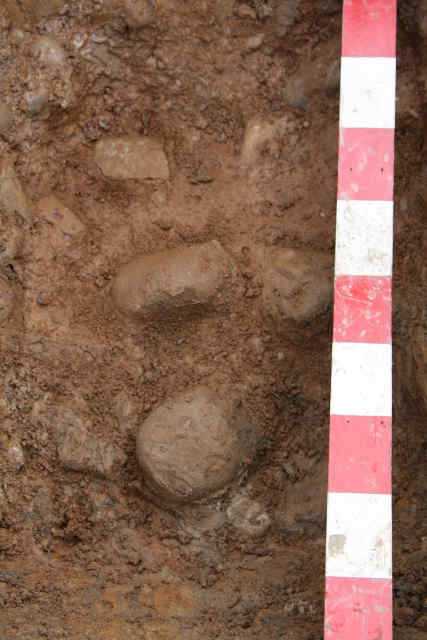 Our initial conclusion is that, on circumstantial evidence, the features revealed do suggest that we have confirmed the route of the major N-S Roman road as being on the line identified by David Ratledge.

Our activities, at least when the weather was fine, attracted a lot of attention from local residents who were very keen to learn more about Roman roads and Wyre Archaeology. We were also delighted to have a number of new diggers joining us from Wigan AS, local students and other keen amateurs. 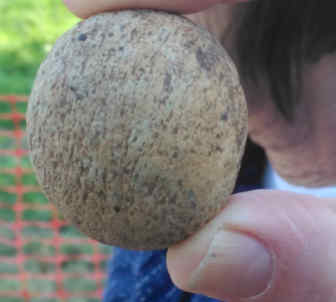 One interesting find pictured here from Trench 2 raised questions. Is it or isn’t it a (Roman) sling shot?